69 SECRET ROOM. The walls of this room are decorated with bas-relief stonework of men with no facial features except mouths. In the center of the room is a stone table supporting the body of a mummified man strapped to the table by metal braces. Another stone table is against the north wall, holding treasures.

The body is that of Karnath Zhul, once an important member of the Worm Cult. He tried to splinter the group away from the leadership of Ormond Triskelion a generation ago. He was defeated and imprisoned. For his heresy, he was mummified alive so that he could never be returned to the earth to be consumed by and reborn as a worm, the greatest punishment available to the twisted logic of the Worm Cult.

Karnath is currently only a corpse, and a badly treated one at that. His desiccated body shows signs of burn marks, and areas where the skin was removed from the underlying muscle. His head is covered by a metal stylized mask of a man screaming. He does not have the traditional mummy-like wrappings, however. He can be awakened to act as a mummy if the Gray Tear is placed into a small cone-shaped cavity in his chest. If this is performed he will serve the one who awakened him, though he can never regain hit points if wounded and he will turn to dust if brought to 0 hit points or if exposed to sunlight.

The stone table against the north wall holds cult objects: a gold staff with a twist to its head like a shepherd's crook (meant to resemble a striking worm) worth 1000 gold crescents, an intricate silver and ivory arm band resembling twisting worm-like creatures worth 800 gold crescents, and a gold chalice (100 gold crescents) full of the gray liquid that brings the Kiss of the Worm God (see Room 63). 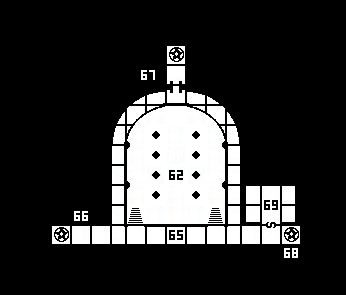