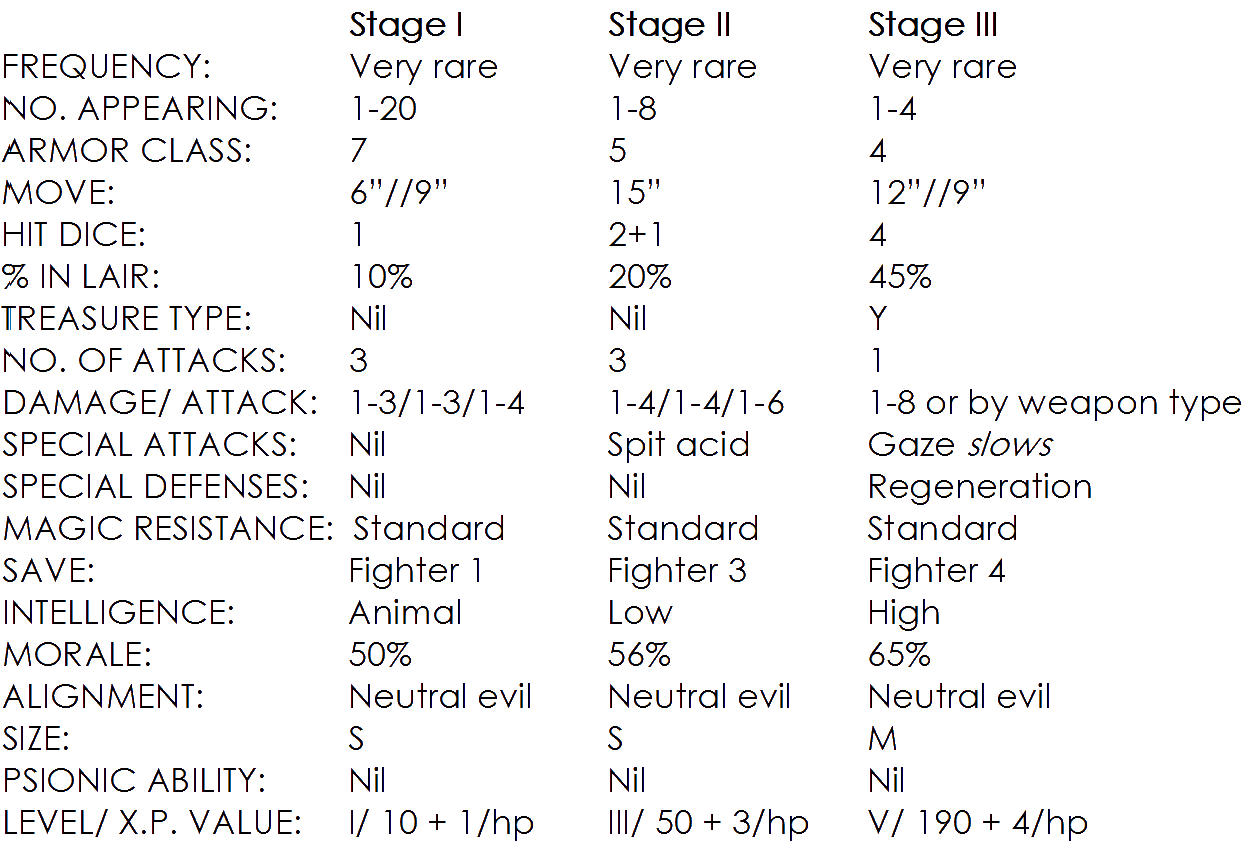 Hellish vat creatures of obscene aspect and brutal hunger, creepers, or piscomorphs as designated by their creator, share the characteristics of fish and primates.


Upon exiting their vat, these creatures are at the first stage of their existence. These stage I creepers have sharp claws and a dangerous bite. They are about the size of a medium sized dog and while their forelimbs are well-developed, their body terminates in a fishy tail. These creatures can consume vat media or vermin, but only gain in strength by feeding on warm flesh.

When they have consumed enough mammalian or avian tissue, they evolve into stage II creepers. At this point, their tails atrophy, to be replaced by a pair of muscular legs. Larger than a stage I, they now have about the same mass as a large goblin. They also develop the ability to spit a glob of acid up to 3”. They can can only attack this way three times before needing to drink and eat to replenish the supply of acid in their gullets. Stage II creepers constantly seek human prey. Having consumed a certain amount, they will develop into stage III specimens.

Stage III creepers are man-like in general shape. Though they retain the large toothy mouth of their antecedents, their claws become more like the hands of men, and they can manipulate weapons or tools. They also have a gaze attack. Stage III creepers that lock eyes with a target have a hypnotic attack which slows the victim if they fail to save versus paralyzation. The attack is mental, not physical, so maintaining eye contact is not necessary and there is no cumulative effect. Avoiding the eyes of the creeper is possible, but individuals who do so must make attacks at -4 on “to hit” rolls. Stage III creepers also gain the ability to regenerate lost hit points, replacing them at a rate of 1 hit point per round.

All creepers can see, even in complete darkness, up to 90'. Larger ones can learn the common tongue, but their monstrous mouths can never produce the syllables of men. Instead, stage III creepers have a form of telepathy that allows them to communicate with intelligent life forms that are within 1”. It also gives them the ability to manipulate and command stage I and stage II creepers at a distance of up to 6”.

History: Pelleas Triskelion developed this variety of vat creature within Castle Triskelion. He labeled the creature 'piscomorph', but most who encounter the monster know them only as creepers. Pelleas originally was able to keep the stage I creepers docile with vat media, drugs, and living insect and amphibian prey. When he introduced rats as a food source for the creatures, they rapidly evolved into stage II specimens and escaped. Since then he has been having his koalinth guards hunt down the stray beasts, unaware that some have progressed further than he knew was possible.