The scorpalbinus is a giant white arachnid with the general body shape of a scorpion. Unlike the scorpion, their tail ends bluntly. Attached to the tip is a thin retractable filament and at the end of this tether is a spiked ball. 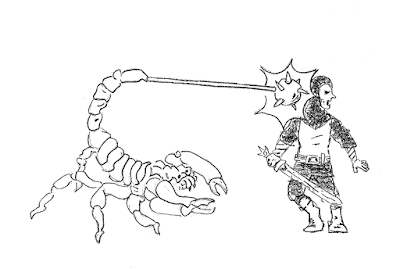 The creature can aim and 'shoot' this ball, hitting individuals as far away as twenty feet for 2-12 points of damage, if there are no obstructions. It can only do this once every round, as it takes time to reel the ball back in. The scorpalbinus can attack one opponent with its claws, and use its tail attack on a separate target.
Posted by Darnizhaan at 12:00:00 PM