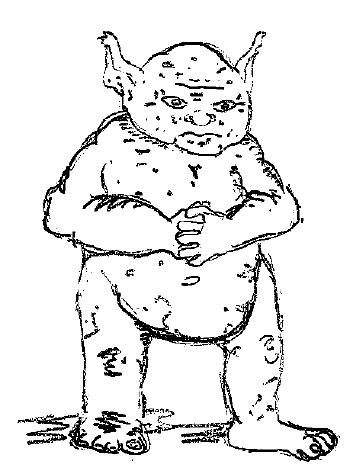 Dingle mirks have the appearance of unwholesome beardless dwarves with warty pale flesh and faces of surprising ugliness. Slightly bloated and clammy to the touch, dingle mirks are always naked, but have no gender.

Dingle mirks attack by means of striking with their fists, doing 1d6 damage on a successful hit. They act as enforcers and guards for drudge hags, keeping prisoners from escaping and performing any other jobs which the drudge hag fancies.

Dingle mirks are not particularly brave, but need never make a morale role in the presence of their drudge hag because they are always more afraid of her than they are of anything else. When struck in combat, their wounds are bloodless and they regenerate one hit point each melee round.

Dingle mirks are created by drudge hags out of leaves, twigs, and dirt and if brought to zero hit points or if their drudge hag is killed, they collapse back into their base components. A drudge hag will sometimes leave the dingle mirks alone in the lair while she tries to capture another child. However, if she doesn't return within a day the dingle mirks will fall apart, so she is careful to come back in time to spare.
Posted by Darnizhaan at 2:00:00 PM