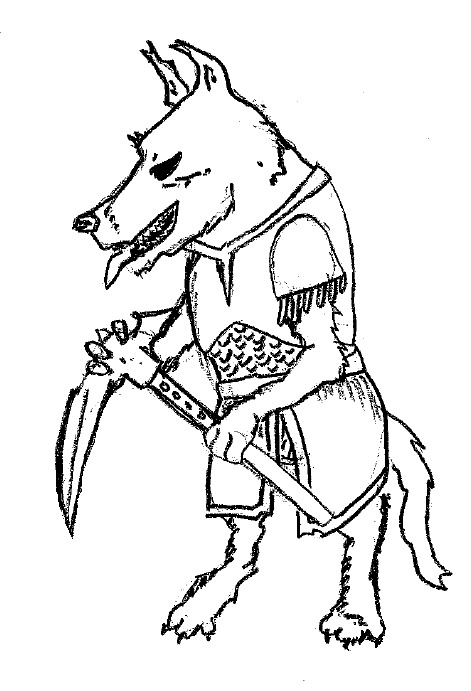 
Gnits are small gnoll-like humanoids that generally dwell in permanent lairs, rather than traveling about looting. They dwell in large bands and extended family units and are likely to seek alliances with other humanoids or evil demi-humans in the vicinity. However, due to their size and relative weakness they more often find themselves serving or being enslaved by more powerful neighbors. Gnits can see in complete darkness to a distance of 60'.

Small groups of gnits (around 30 members or so) will generally be led by a leader of greater size and toughness. This leader will usually be 4' tall or more with armor class 6, have 6 hit points, and will attack as a one hit die monster. There will be at least one such leader-type for every 30 members of the band. If 60 or more gnits are encountered, there will be an additional 1 or 2 stronger gnits, known as a “gnights”. Gnights will have armor class 5 and have between 9 to 14 (1d6+8) hit points. Gnights will be size M creatures and attack as a 2 hit die monster. Each gnight will have an additional leader-type gnit serving as personal squire and lackey.

Gnits employ dog-like reptiles known as gnawgas as guards and pets. 2-20 gnawgas will generally be found in a gnit lair.

Female gnits fight as well as males and are practically indistinguishable from them. 50% of any gnit force (the 30-120 rolled in number appearing) will be female. Young equal to up to 50% of the number of adults will be present in a lair. Most young will be very small gnitlings resembling puppies which have only 1 hit point and do not fight. There will often be larger juveniles as well who have at least 2 hit points and typically fight alongside their elders.

Gnits usually inhabit ruined or abandoned shelters made by humans, humanoids, or demi-humans. They can also be encountered below ground. A full 50% of the time, the gnits will be dominated by stronger humanoids or evil demi-humans, usually gnolls. If this is the case, the stronger group will often kill off any gnights that would normally be present, unless they feel they can use them.

Most gnits will carry a modified pick known as a gnit pick. This weapon is usually 2' long with an encumbrance of 35 or so gp weight. It has a speed factor of 4 and does 1-4 points of damage to S, M, or L sized creatures. It should be treated as a horseman's military pick if the armor class adjustment table is used. The head of the pick is sometimes decorated with the face of a gnit, gnawga, or reptile such as alligator or lizard. Gnits have also been seen using other weapons as circumstances dictate, usually daggers, darts, short bows, slings, short swords, and spears.

Description: Gnits generally appear as smaller, weaker gnolls. Their skin tends to pale green and hair color is usually dark yellow to gray. Their armor is usually made of gnawga-hide. Gnits have short lifespans with 25 years being considered very old amongst their kind.

Tribal spell casters: Tribal spellcasters are found among gnits and are highly respected. Among their kind they are often called “gnit-wit” as a sign of deference to their great wisdom and power. These spellcasters are divided into two types, shamans and witchdoctors. Gnits may become shamans (up to the 4th level of clerical experience) or may multi-class as a witchdoctor (up to the 2nd level of magic use).
Posted by Darnizhaan at 12:00:00 PM