We are due for another edition of Friday Night Fights and this week it is the battle of Rocky vs Rocky II. Who will come out on top in a fight between a stone golem and an earth elemental.

Usually I start alphabetically, so I will start with the earth elemental. Let's use a 16 HD elemental because an 8 or 12 hit die elemental cannot actually strike a stone golem, making the fight moot.

Notes include being able to do structural damage and having -2 on each die of damage against airborne creatures. Neither of these specials is germane.

"Magical creatures with hit dice equal to or greater than those of the golem are able to attack it with effect. For purposes of determination of hit dice, figure 4.5 hit points per hit die, and points being rounded up. Thus a flesh golem has 9 dice, a clay golem 11, a stone golem 14, and an iron golem 18."

It can also do structural damage and it can cast a slow spell within 1” of its front every other melee round.

Let's assume an underground dungeon environment, as I could not find golems in any of the outdoor encounter tables in the DMG.  At that point I didn't look for elementals.

Declare intentions. Neither monster has a long range attack (the golem's is only 1”) and they both move at 6”, so they both close to combat. Initiative is pretty much moot, but they roll a 1 and a 6.

Next round. New intentions. The elemental will attack with the club-like fists and the golem uses the slow spell. Eartha rolls a 5 and Stoner rolls a 4, so Eartha goes first. It rolls a '20', so a hit for 12 points. The golem casts the slow spell, which: no saving throw! The elemental is now slow and will be so for 3+14 = 17 rounds, assuming the level=hit dice for purposes of duration. 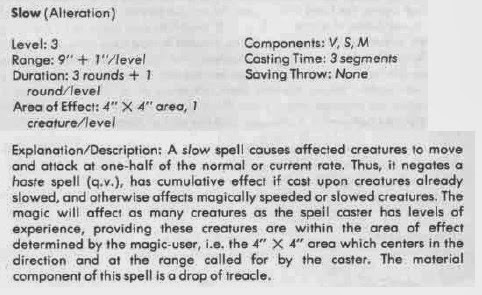 End of round 1. The earth elemental is unharmed, but is slow (½ speed). The golem has 48 hit points left.

Next round. New intentions. The elemental wants to hit, but is slow, so it loses its attack this round. The golem can't cast a slow spell, so it will strike. It rolls a '18', so it hits for 11 points.

End of round 2. The earth elemental is slow for 16 more rounds and has 72 hit points. The golem is steady at 48 pips.

Round 4 and the elemental can't attack. As a matter of fact, if my math is right, it can't attack until round 7. The golem spends round 4 hitting the elemenal for 15 points (he rolled a 7 to hit). The golem slows the elemental again in round 5, so it is now at 1/8 speed. In round 6, it attacks again for 9 points.

OK, its pretty obvious what happened. That slow spell was just too much for the elemental to beat, although the golem did get reduced to just 14 hit points.
Posted by Darnizhaan at 3:30:00 PM