25B PAR 4 THE COURSE. The double doors from Room 25A open onto a long corridor about 20 feet wide by eighty feet long before there is a turn to the right. The floor is made of a firm green and very durable substance that feels like felt. Next the the doors is a weapons rack holding on club (resembling a putter) for each adventurer. Their names are engraved on the shaft.

These clubs are special and act in the following fashion based on character class:

Fighter, paladin, or ranger – act as two handed sword +1 for damage, etc.
Thief, assassin, bard, or monk (and small fighters, dwarf, halfling, gnome) – act as a broad sword +2
Cleric or druid – act as a footman's mace +2
Magic-user or illusionist – act as a wand of magic missiles, may shoot one magic missile per round
Multi-class – DM's choice

The clubs may used, even for characters for which that weapon is not normally allowed.

Behind the bend there is one ballboy for each adventurer.

The ballboys look like humans with enormous white spherical heads, marked by small dimples. They have eyes and a mouth in the areas one would expect them. Their clubs also resemble putters, but do only club damage.

After the bend the corridor continues another sixty feet, where there is a five foot wide hole in the floor. This hole is as dark as a darkness spell and is actually a teleporter to the Room 25C. The first character to enter will get a score of 1. The second a 2, and so on. The character who finishes all the courses with the lowest score is the winner. 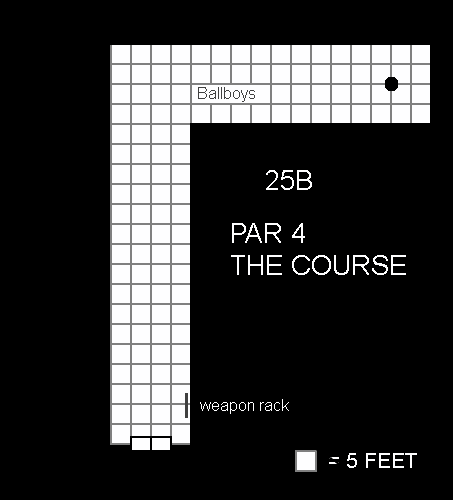 Email ThisBlogThis!Share to TwitterShare to FacebookShare to Pinterest
Labels: The Grounds