87 SUNKEN SHIP. The crow's next of the main mast of a sunken ship sticks out of the water at this site in the salt mere. Due to the ghostly green radiance that the ship emits, this crow's nest is actually quite conspicuous. A single skeleton is in the nest. One of the dread skulls has wrapped a colorful red handkerchief about its head.

It has been told to “look out”, so it is holding its hand above its eye sockets. It has been given no further instructions so it will not attack unless attacked first.

The mast above the crow's nest is missing, apparently splintered and cracked a long time ago. The fore-mast and mizzen-mast are present, but their tops do not poke above the surface. No sails remain on the masts, but there is still plenty of rigging. The bottom of the ship is crashed on the lake floor about fifty feet deep, embedded on a projection of rock on the floor at Rooms 87p and 87Q.

The water surrounding the ship (and to about ten feet away) acts like a permanent bubble of airy water. It extends with the masts up until about ten feet from the surface. The dread skulls don't need the airy water because they don't breathe, but they like it because it allows them to give orders, curse at each other, drink rum, and sing dirty sea shanties. Perhaps this bubble also protects the wood, rope, and the dread skulls' clothing, for these items appear to be in much better condition than they should be from being underwater for years. As noted above, the ship radiates a ghostly green glow that is equivalent to twilight. It allows anyone on board to see without the need for artificial light.

As a primer recall directions on a ship: the front is the fore or bow, the rear is the aft or stern, port is left, and starboard is right. The scale on the map is 5 feet per square. 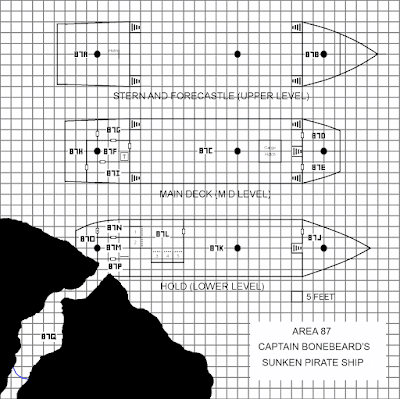