2 ROOM OF ALTERATION. In the center of the room is a pedestal supporting a glowing green stone statue of woman with butterfly wings. The ceiling is decorated by a soothing alternating pattern of rainbow colored light which is adequate to see by. The secret door on the west wall is obvious from this side as it is a lighter shade of green and opens with a lever placed against the wall next to it. There are no windows. The archways to the north and south have a bearded man's face carved into the keystones. The door to the north is decorated by a white crescent moon while the door to the south is decorated with the symbol for Evocation (see Room 3).

The statue lacks a mouth, nose, or ears, but does have dozens of closed eyes placed irregularly on the front of the head, including where the mouth and nose should be. It faces west and holds a large metal tray in front of it. Below the statue is the inscription “Change is the only constant” and this symbol: 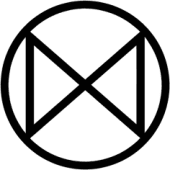 If anything is placed on the statue's tray, the eyes will open and an change will overcome the object over the course of exactly one turn. Roll below on the following tables:

Table I Type of Change

These tables require interpretation and consideration by the Dungeon Master. For Table I, the Dungeon Master should choose which attribute is easier to resolve for the item in question. The statue will not make items of campaign-breaking worth or quality (artifacts, relics, etc.) Magic items and living things are entitled to a saving throw to avoid metamorphosis. The statue will only work three times in a 12 hour period. After the third time it will stop glowing until it recharges itself. Items changed will radiate alteration type magic.

Type: The object becomes a new kind of thing, but related in some way to what it was. For example, a flute may become a clarinet or a drum.

Value: The object's worth is changed. For example a gem may increase or decrease by a base value.

Life: An object becomes alive or if dead, is brought back to life, or un-life depending upon the second roll. Living objects might be healed, harmed (maimed, diseased, etc.), become undead, or experience reincarnation based upon the Dungeon Master's interpretation of the dice.

Age: Object will get younger or older. Older objects may break more easily or be spoiled.

Edibility: For some reason, objects may become able to be consumed, or not. For example, fire that gains the property of edibility can now be eaten without the consumer becoming burnt.

Beauty: Subjectively, the object will become more or less attractive. This may not actually affect its value, however.

Here is an example of how to use the tables.

Example: A dagger +1 is placed on the tray and fails its saving throw. A '2' is rolled for Table I and a '3' is rolled for Table II. The Dungeon Master decides the Table I result refers to value and the Table II result makes it somewhat less valuable. It is now a magic dagger, but only +1 to hit and not to damage or it could be a magic dagger, but only +1 versus creatures that are smaller than man-sized.