I suppose I wasn't the first one to notice this, http://www.reddit.com/r/DnD/comments/2fn2s6/lets_build_the_party_from_samuel_adams_adventures/, but when my wife brought these home last month I thought they looked, well, designed for Dungeons and Dragons. 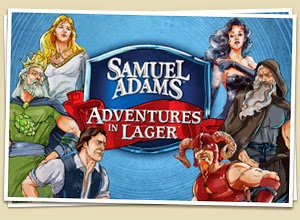 This is a group of beers by Samuel Adams:

We have the lady in white, Noble Pils, who looks like she would make a good cleric.

Next is the green clad man with the hops on his chest and the crown, Double Pilsner.  Looks like a king, guess he'd be a fighter or paladin.

Then there is Samuel Adams in an outfit that reminds me of Han Solo.  I suppose he could be a ranger, fighter or thief.

Then there is the Vixen, top right.  Definitely a thief.

Double Black is the wizard  and the guy in red with the horns also has a kickass name, Hellesbock.  Has to be a fighter of some sort.

Makes a great adventuring party and something to enjoy at your game.